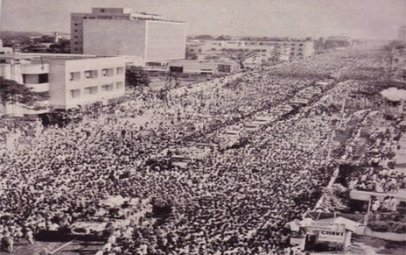 He is very familiar for his oratorical style and writing skills that has captivated many hearts. The history of Tamilnadu speaks about Anna. The state required Anna to be called with her own name, because he was the man who renamed the Madras State as Tamil Nadu.

The funeral of Anna was the largest funeral attended by nearly 15 million people and this record has entered into the Guinness Book of Records in 1984.

EARLY CAREER
C. N. Annadurai was born in Conjeevaram (presently Kanchipuram) to Natarajan and Bangaru Ammal in the state Tamil Nadu on September 15, 1909. His family was a weaving middle-class family belonging to Sengunta Mudalaiyar caste.

It was the interest of Anna in serving the poor and down trodden, which gained him interest in politics. He was inspired by the leaders like M. Singaravelu and C. Basudev of communist party. He met Periyar E. V. Ramaswamy (President of Justice Party) in 1934 at Tirupur youth conference and immediately got attracted towards him. Then, he joined Justice Party in 1935, which was formed in 1917 by Non-Brahmin elites. Anna worked as a sub-editor in the magazine run by the party. The party was very successful till 1937 until it was defeated by Indian National Congress dominated by Brahmins.

He served as an editor for ‘Viduthalai’ and also associated with ‘Kudi Arasu’, a Tamil weekly. A new journal called “Dravida Nadu” was started by Anna himself in 1942.

India attended independence on August 15, 1947. Periyar feared that the independent India will be under the rule of Brahmins, hence he considered the Independence Day as a mourning day. This was opposed by his party members, one among which is Anna. This had developed cold war between two of them. Furthermore, when Periyar married a girl who was 40 years younger than him, it provoked Anna to leave the party and start his own party, “Dravida Munnetra Kazhagam” (DMK).

PATH TO SUCCESS
Anna had a desire of naming the independent Madras state as “Dravida Nadu”. This goal was considered to be unrealistic by Sampath, who left Periyar along with Anna. Annadurai also started accepting the film starts like MGR into the party. Sampath felt that partiality was being shown between himself and the people supporting Dravida Nadu. Thus, he left the party and started a new party called the Tamil Nationalist Party in 1961.

Indian government divided the Madras Presidency into Karnataka, Andhra Pradesh, and Kerala along with Tamilnadu. This was the time when Anna changed his call for Dravida Nadu and named the new Tamil speaking state as Tamil Nadu.

In 1957, State Legislative Assembly elections were conducted in which Anna won the Congress party from the Kanchipuram constituency.

In 1962, DMK won state Legislative Assembly elections by gaining 50 seats among the 143 seats it contested. But in this election, Anna lost to the Congress party in the Kanchipuram constituency. However, he was nominated to the Upper House (Rajya Sabha) of the Parliament of India.

Anna was very popular for his oratorical skills. It was his speeches in the Parliament that brought him into the limelight of India. The whole country and the Parliament were stunned on May 5, 1962 when Anna advocated the withdrawal of four South Indian states. He also suggested that India should change into “a comity of nations instead of a medley of disgruntled units.” This statement shocked entire Parliament, including Jawaharlal Nehru, then Prime Minister of India. He complained that he do not support the discrimination of the southern states and the imposition of Hindi language as the official language. Nehru was enraged and declared that the separation of Pakistan from India is ‘bad enough’ and he does not want to see India dividing into thousands of bits. He also vowed to repel such secessionist demands. DMK then started concentrating on opposing Hindi language, which caused violence sometimes.

It was in 1967, when DMK defeated the Congress party in the state Legislative Assembly elections by winning 137 seats. Annadurai became the Chief Minister of Tamil Nadu for the first time and he was the first Non-Congress leader of independent Tamil Nadu. He remained in the seat until his death. 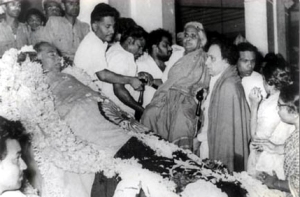 Anna had a habit of chewing tobacco, which caused him cancer. Despite the treatment in the US, he was died on February 03, 1969.

His death shocked everybody in Tamilnadu and his funeral was attended by 15 million people, the largest funeral so far.

PERSONAL LIFE
Anna was raised up by Rajamani Ammal. He had his school education from Pachaiappa’s High School and received graduation from Pachaiappa’s college. He was married to Rani in 1930 when he was 21 and still was a student. He did his B.A. (Hons) degree and pursued M. A. degree in politics and economics. Before entering into politics, he worked as an English teacher in a high school for some time, after which he joined journalism and politics.

Anna was the first Non-American to receive Chubb Fellowship from Yale University in 1968. Later, he received honorary doctorate in the same year from Annamalai University.

The present office of DMK is called as Anna Arivalayam, a tribute to Annadurai built in 1987.

The Mount Road has been renamed into Anna Salai and a statue has also been erected in this road.

Anna has been listed as one of the top 100 people who played an important role in shaping India, in Today magazine.

Anna Centenary Library has been constructed in Chennai in the year 2010, as a tribute to Anna.

Anna Samadhi has been established near the famous Marina Beach in Chennai.

Anna gained popularity also by means of his film career. His first movie as a writer was “Nalla thambi” of 1948. He had also made many distinguished literary works.